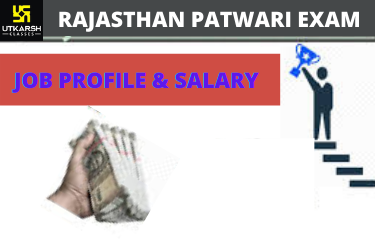 Before appearing for any government exam, it is only wise to know the job profile and salary that you will be receiving after your appointment for the position. This article gives you some important information that you should know if you are appearing for Rajasthan Patwari Exam this year.

Rajasthan Subordinate & Ministerial Services Selection Board (RSMSSB) organizes the Patwari exam every year to appoint Patwaris for the available vacancies. Thousands of students compete and work hard to get to the top of the merit list and qualify for the job vacancies.

Let us learn more about the Job Profile and Salary of a Patwari.

If you are wondering what exactly is the job of a Patwari, you should first of all understand what a Patwari is. Patwari is the name given to the position of a village accountant under a Tehsildar. Now you must already have an idea about the KRAs (Key Responsibility Areas) of a Patwari.

A Patwari has the following Job Responsibilities:

–   Working as an assistant to the Tehsildar in a Tehsil.

–   Looking after all the villages appointed to him.

–   Meeting village farmers to listen to their complaints or queries.

–   Assisting the collection of agriculture land tax from the farmers of villages under him on behalf of the state government.

–  Settling land disputes in the villages among farmers through public meetings.

–   Responsible for the collection of all the data related to agricultural land and ownership of lands in the village in physical files or computers.

–  If any compensation is released by the state government as per the records submitted by the Patwari, it is Patwari’s duty to distribute it among the deserving villagers accordingly.

Selected Candidates who are placed in the position of a Patwari under Tehsildars are provided with 6 months of training to help them understand their Job Role and KRAs. The initial 2 years of the job are referred to as the Probation period. During this period, the candidates are eligible for a fixed remuneration set by the state government. There are no allowances received during this period, except for the fixed remuneration.

After the initial two years, the salary of a minimum grade Patwari in Rajasthan in Rs. 24,300. Several allowances are also provided to the Patwaris as set by the state government.

From this Salary, Rs. 2,080 are deducted as per the National Pension System (NPS) since Patwari are eligible for Pension from the state government after their retirement.

Therefore, in hand salary received every month by a Patwari in Rajasthan is Rs. 24,380.

Allowances provided by the State Government in Patwari Job

Being a government employee, there are various benefits of being a Patwari under the state government. These benefits appear in form of multiple allowances and employee benefits. Some of them are:

For the Patwari aspirants of the year 2019-20, the total number of available vacancies were 4421 in Rajasthan, including all the vacancies in 33 districts of Rajasthan. This number can be different every year. Hence, the students need to keep an eye on this to prepare accordingly. The competition level for this exam is moderate, and the difficulty of this exam is also moderate. However, a lot of people appearing for the exam every year makes it difficult to make it to the list of selected candidates.

The exam is constituted of 3 stages:

The candidates selected after the preliminary exam are eligible for appearing for the main exam. The students who clear the main exam have to go through the document verification process to be placed on one of the vacancies available under the state government for the position of a Patwari. Both the Preliminary and Main exams are objective types and can be conducted online or offline. Their syllabus is available on the RSMSSB website easily in a well-defined structure. There is a lot of study material available on the internet as well as in the physical markets too.

Such ease of availability of the study material and plenty of coaching centers offering the preparation course, along with the various benefits that the Patwari Job offers, attracts a large number of students each year to attempt this exam.