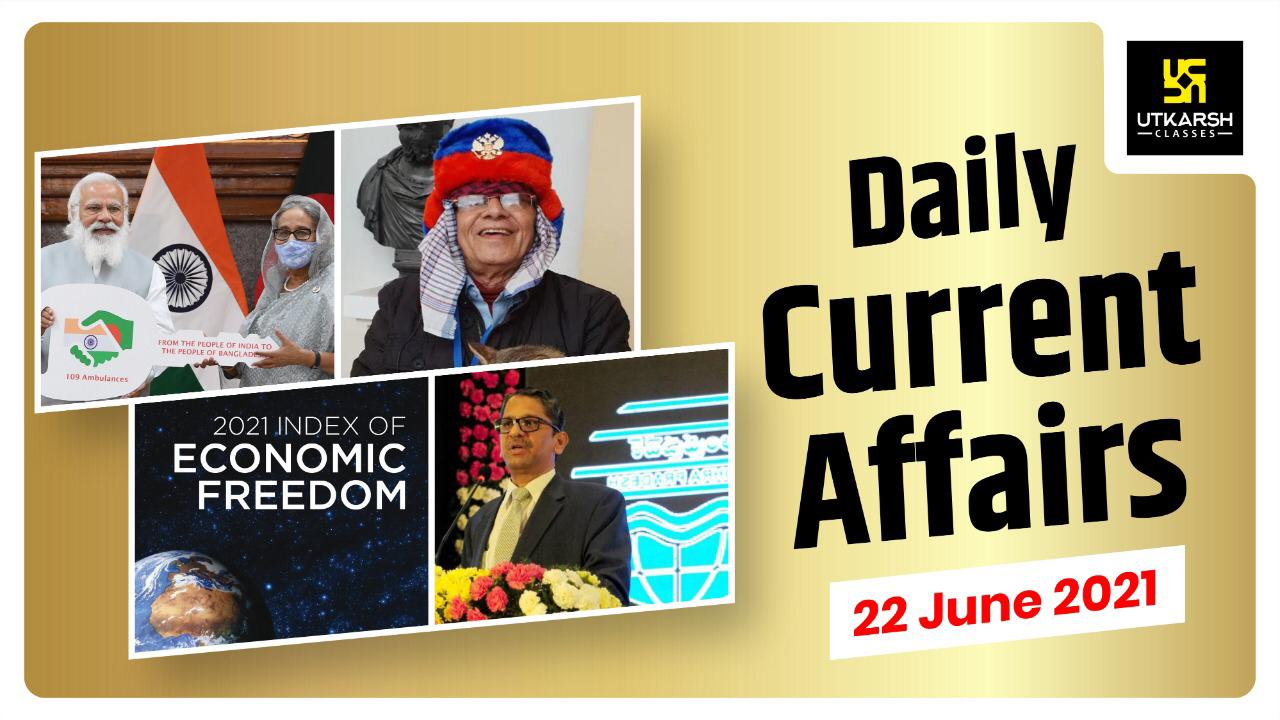 The Centre for Science and Environment (CSE) released the State of India’s Environment Report 2021 on June 6, 2021. It revealed that India’s ranking slipped two places from last year to 117th pertaining to the 17 Sustainable Development Goals (SDGs).

They were adopted as part of the 2030 agenda by 193 United Nations Member States in 2015. Due to major SDGs that remain unmet in India, such as SDG 2: Ending hunger and achieving food security, SDG 5: Achieving gender equality, and SDG 9: Building resilient infrastructure, promoting inclusive and sustainable industrialization, and fostering innovation, India dropped two places from 115th this year.

Free vaccination for all adults to begin from 21 June, 2021

From June 21, 2021, the Central Government will give free Coronavirus vaccines to all Indian citizens over the age of 18 under the centralised COVID-19 free immunisation policy. Prime Minister Narendra Modi announced the consolidated free vaccination policy in a televised speech to the country.

India and US collectively launch a Hydrogen task force

On June 17, 2021, India and the United States created a hydrogen task group as part of their Strategic Clean Energy Partnership (SCEP) to help India’s energy security initiatives. The US-India Strategic Partnership Forum advised us of this (USISPF).

The US Department of Energy, the Union Ministry of New and Renewable Energy (MNRE), and the USISPF formed the US-India Hydrogen Task Force. Using India’s green hydrogen, according to a draft proposal released by the Renewable Energy Ministry, is one of the steps toward reaching energy sufficiency for the country.

About the task force

According to the UN Conference on Trade and Development’s (UNCTAD) World Investment Report 2021 released on June 21, 2021, India got USD 64 billion in foreign direct investment in 2020. India is now the world’s fifth-largest beneficiary of inflows.

The COVID-19 second wave, according to the UN study, has a significant impact on the country’s overall economic activity, but the country’s strong fundamentals provide “optimism” for the medium term.

For the first time, the Indian Navy took part in a joint naval drill in the Gulf of Eden with the European Union Naval Force (EUNAVFOR). On June 18 and 19, 2021, a total of five warships from four navies took part in the drill.

The Indian Naval ship INS Trikand, a stealth frigate, took part in the two-day practice because it was already stationed in the vicinity on an anti-piracy mission. Other vessels participating in the naval drill were the Spanish Navy Ship ESPS Navarra, the Italian Navy Ship ITS Carabiniere, and two French Navy Ships FS Surcouf and FS Tonnerre, according to an Indian Navy release.

5 ‘Divyangta Khel Kendras’ to be set up by the Government

On June 20, 2021, Union Minister for Social Justice and Empowerment Thawar Chand Gehlot announced the establishment of five Divyangta Khel Kendras around the country. The Minister was speaking at the ‘Samajik Adhikarita Shivir’ in Gujarat, where Divyangjan was receiving aids and assistive gadgets through the ADIP (Assistance to Disabled Persons for Purchase/Fitting of Aids and Appliances) scheme.

The Union Minister said that, in light of the interest in sports among the country’s “Divyangjan ” and their outstanding accomplishments at the Paralympics, the Ministry has decided to build five “Divyangta Khel Kendra” in various regions of the country.

Aashish Chandorkar appointed as the director of India’s WTO mission

The Indian government has selected Aashish Chandorkar as ‘Counsellor’ in India’s Permanent Mission to the World Trade Organisation (WTO) for three years, ahead of the WTO ministerial session in 2021.

A private person has been appointed to the Mission for the first time. Aashish Chandorkar is the director of the Smahi Foundation of Policy and Research, a policy think tank based in Bengaluru.

Laurel Hubbard, a New Zealand weightlifter, is set to create history and stir up controversy after being confirmed as the first transgender athlete to compete in an Olympic Games. The 43-year-old is viewed as a serious medal contender in the women’s super heavyweight 87kg-plus category in Tokyo, where she will be the fourth oldest weightlifter at an Olympics.

Those who believe she has unfair advantages in strength and power because she went through male puberty before transitioning in 2012 have questioned her inclusion, while it is being welcomed by trans groups.

Economic Advisory Council to be set ip in Tamil Nadu

To advise the chief minister, the Tamil Nadu government will organise an economic advisory board that will include Nobel laureate Esther Duflo of the Massachusetts Institute of Technology (MIT) and former Reserve Bank of India governor Raghuram Rajan.

Governor Banwarilal Purohit announced the other members of the council in his ceremonial address during the first session of the 16th state legislative assembly in Chennai, including former chief economic advisor to the central government Arvind Subramanian, development economist Jean Dreze, and former Union finance secretary S Narayan.

A new constitution to be drafted by Chile

In the election of an assembly to design a new constitution to replace the one imposed under the military dictatorship in the 1980s, Chileans chose left-leaning independent candidates.

According to official results released Monday, 48 seats in Chile’s 155-member constitutional assembly were awarded to independent candidates, the majority of whom identified with socialist ideology, during weekend voting.

As the quest for alternative ethanol feedstocks heats up, the ICAR-Central Tuber Crops Research Institute (CTCRI) has identified cassava (tapioca) as a suitable raw material for bioethanol production. It has been done in order to meet India’s Ethanol Blending Petrol (EBP) program’s 2025 deadline.

Cassava has been identified as a possible candidate for bioethanol production due to its high starch content and ability to thrive under low maintenance circumstances. Given the apparent failure of an alcohol plant put up in Palakkad in the late 1990s, the economic viability of scaling up production from cassava varieties must be determined.