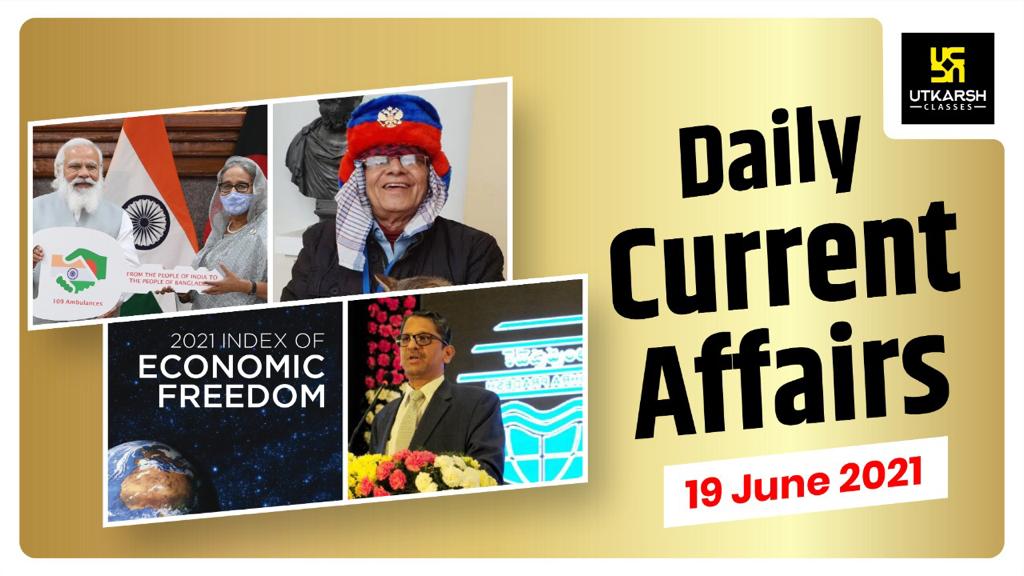 On June 1, 2021, the Debswana Diamond Company discovered the world’s third-largest diamond in the Jwaneng mine in Botswana, South Africa. Botswana is Africa’s largest diamond producer.

The 1,098-carat stone was delivered to President Mokgweetsi Masisi two weeks after it was discovered.

India remained at 43rd place on the Institute for Management Development’s World Competitiveness Index 2021. (IMD). Switzerland came out on top in the 2021 rankings, with Sweden coming in second.

There are 64 countries on the World Competitiveness Rankings List. In the 2021 rankings, innovation, digitization, welfare benefits, and social cohesiveness were all important factors in economic performance.

Kenneth Kaunda, Zambia’s first president and a staunch supporter of African independence, has died. He was 97 years old at the time.On June 17, 2021, Zambia’s current President Edgar Lungu announced the sad news on his social media website.

Zambia will be in mourning for 21 days, he said. On June 14th, the former President was brought to the hospital, with officials later stating that he was being treated for pneumonia.

Coronavirus-related deaths globally reached a sad milestone of 4 million on June 17, 2021, according to a Reuters calculation. It is because of the fact that many countries struggle to obtain enough COVID-19 vaccines to inoculate their people.

While the frequency of new COVID-19 cases and deaths has dropped in countries like the United States and the United Kingdom,other countries continue to face vaccination shortages as the delta variant becomes the dominant strain around the world.

Researchers have identified a new species of Tardigrade in the genus Stygarctus, which they have named after the state of Kerala where it was discovered. Tardigrades are so minute that studying them necessitates the use of advanced microscopes.

They are also known as moss piglets’ and ‘water bears,’ and despite their small size, they are among the most hardy animals on the planet.

The Union Cabinet approved the Inland Vessels Bill, 2021, on Wednesday, which would replace the Inland Vessels Act, 1917. Inland waterways totaling 4,000 km have been operationalized. The bill will govern inland vessel safety, security, and registration. Instead of distinct regulations set by the states, the Bill establishes a uniform law for the entire country. There will be no need to seek separate licences from the States because the certificate of registration issued under the proposed law will be deemed valid in all States and Union Territories.

The government has lowered the tax value for edible oil imports, including palm oil, by up to USD 112 per tonne, which analysts believe will result in lower domestic costs. The Central Board of Indirect Taxes and Customs (CBIC) has reduced the tariff import value of crude palm oil by USD 86 per tonne and RBD and crude palmolein by USD 112 per tonne, respectively.

The base import price of crude soybean oil was also decreased by USD 37 per tonne. The new tariff value for edible oil got into effect on June 17,2021.

Athlete Milkha Singh passes away at 91

Milkha Singh, a legendary Indian sprinter, died on Friday as a result of post-Covid problems. At the Post Graduate Institute of Medical Education and Research, he was receiving treatment. The 91-year-old had tested positive for COVID-19 on May 19, but was placed in home isolation after confirming that he was asymptomatic at his Chandigarh apartment.

However, on May 24, the great athlete was hospitalised to the Fortis hospital’s ICU in Mohali owing to “COVID pneumonia.” On June 3, he was transferred to PGIMER in Chandigarh.

His demise came just five days after his wife Nirmal Kaur passed away from complications related to the Covid procedure.

On June 19th of each year, members are encouraged to promote awareness of sickle cell disease on a national and worldwide level, according to the resolution.

The Ordnance Factory Board (OFB) will be abolished, and seven new Defence Public Sector Undertakings will be established to handle the country’s 41 ordnance factories. The Cabinet gave its approval to the establishment of the organisations, which would be wholly owned by the government.

By the end of the year, the change should be complete. There would be no changes in service conditions, according to the Cabinet note on the decision.