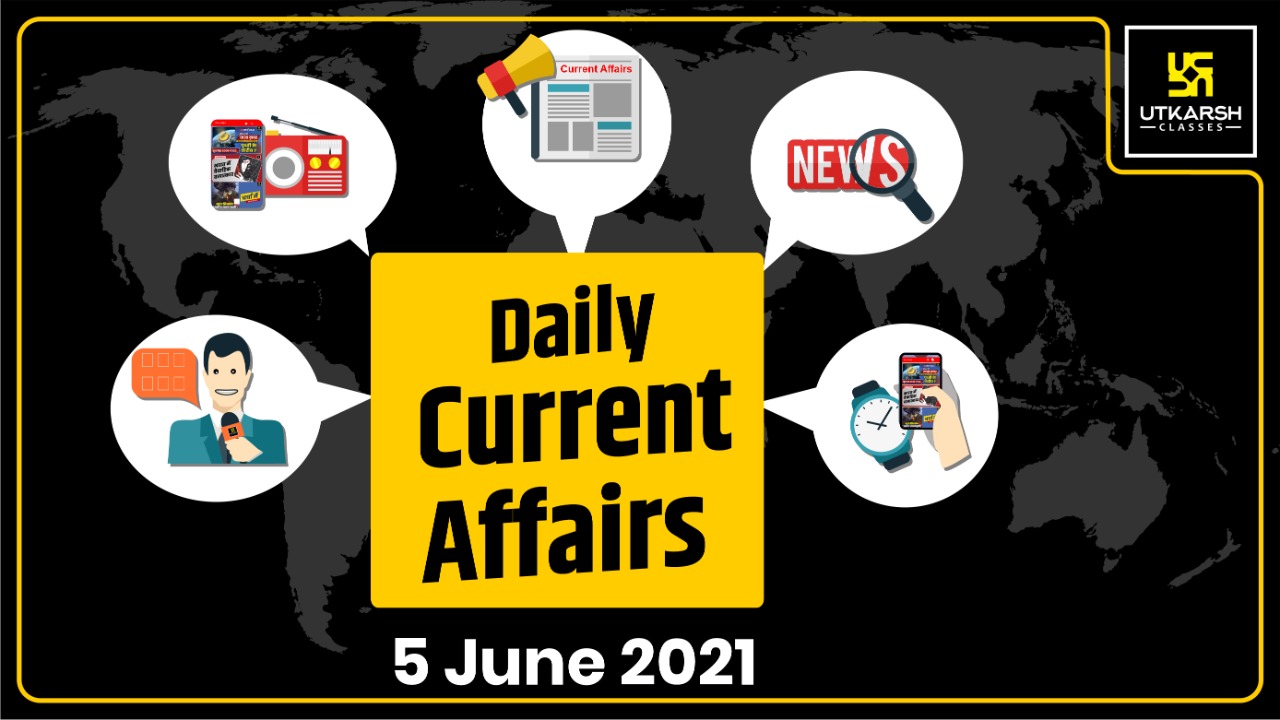 Every year 5 June is celebrated as World Environment Day. The main purpose of celebrating this day is to make people aware about the damage caused by pollution due to environmental exploitation.

About the United Nations

The Pension Rules for Civil Servants were revised by the Centre, making it illegal for retired officials from intelligence or security-related organisations to disseminate any information about their organisations without first obtaining permission from the appropriate government. The retired officials will be required to sign a commitment to that effect, and their pensions may be withheld or revoked if they do not follow the guidelines.

The ban is supposed to affect retired police chiefs and intelligence agency personnel who have written a book or write regular pieces for newspapers and magazines.

Every year on June 4th, the International Day of Innocent Children Victims of Aggression is commemorated worldwide. The United Nations’ commitment to protecting children’s rights is reaffirmed on this day. This day honours the suffering of children throughout the world who have been subjected to physical, mental, and emotional abuse. The primary goal of today’s celebration is to raise awareness about the agony and suffering experienced by victims as youngsters.

The Union Cabinet, chaired by Prime Minister Narendra Modi, was informed of a Memorandum of Understanding (MoU) on cooperation in the field of Sustainable Urban Development signed between the Ministry of Housing and Urban Affairs (MoHUA) of the Government of India and the Ministry of National Planning, Housing and Infrastructure of the Government of Maldives. The Memorandum of Understanding was signed in February 2021.

A Joint Working Group (JWG) would be formed under the MoU to design and implement cooperation programmes, according to the Ministry of Housing and Urban Affairs. The Joint Working Group will convene once a year, in the Maldives or India, on alternate years.

Agreement between India and Maldives

The Bihar government has suggested reserving 33% of seats in medical and engineering institutions for girls, which might be a first for any state. The administration intends to introduce two new bills in the upcoming Assembly session to formalise the proposal: the Bihar Engineering Universities Bill and the Bihar Medical Education Bill.

The Asian Development Bank and the Indian government have agreed to fund a road improvement project in Sikkim. The Asian Development Bank (ADB) will provide a $2.5 million project readiness financing (PRF) credit to Sikkim to support projects relating to the upgradation of main district highways. It will increase connection while also boosting the state’s economic activity.

The project readiness financing (PRF) would aid in connecting key district and other highways to the national and state highway networks. To increase road connectivity in Sikkim, the ADB-funded North Eastern State Roads Investment Program was established in 2011. State agencies will create comprehensive engineering blueprints for several sub-projects.

China and Pakistan are conducting a combined military drill in Tibet, marking a new milestone along the Line of Actual Control (LAC). It has two objectives: attacking warships and launching land attacks from the sea, and improving air-defence capabilities to target enemy aircraft, missiles, or unmanned aerial vehicles (UAVs).

The drill takes place against the People’s Liberation Army (PLA) backdrop, which recently integrated its troops with air-defence capabilities with the PLA-Air Force (PLAAF) along the LAC for the first time.

The Union Cabinet, led by Prime Minister Narendra Modi, has approved the signing of a Memorandum of Cooperation (MoC) on Sustainable Urban Development between India’s Ministry of Housing and Urban Affairs and Japan’s Ministry of Land, Infrastructure, Transport, and Tourism, which will replace an existing MoU on Urban Development signed in 2007.

After 40 years of service, the Indian Navy’s oldest hydrographic survey ship, INS Sandhayak, was retired on Friday at the Naval Dockyard in Visakhapatnam.

According to an official statement issued by the Indian Navy, the ship has been an active participant in many significant operations, including Operation Pawan (assisting the Indian Peace Keeping Force in Sri Lanka in 1987) and Operation Rainbow (providing humanitarian assistance following the 2004 tsunami).

Mauritius has lost one of its most distinguished patriots. They were essential in the country’s campaign for complete decolonisation to exercise sovereignty over the whole Republic of Mauritius’ territory, including the Chagos Archipelago.

The Archaeological Survey of India (ASI) has discovered three additional caves in the same place nearly two centuries after a British military officer described the Trirashmi Buddhist caverns — also known as Pandav Leni — on a hill in Nashik.

The government has decided to increase the validity term of the Teachers Eligibility Test (TET) qualifying certificate from 7 years to lifetime with retrospective effect from 2011, according to Union Education Minister Ramesh Pokhriyal’ Nishank’. The National Council for Teacher Education (NCTE) authorised the extension of the TET certificate validity from 7 years to a lifetime during its 50th meeting in 2020.