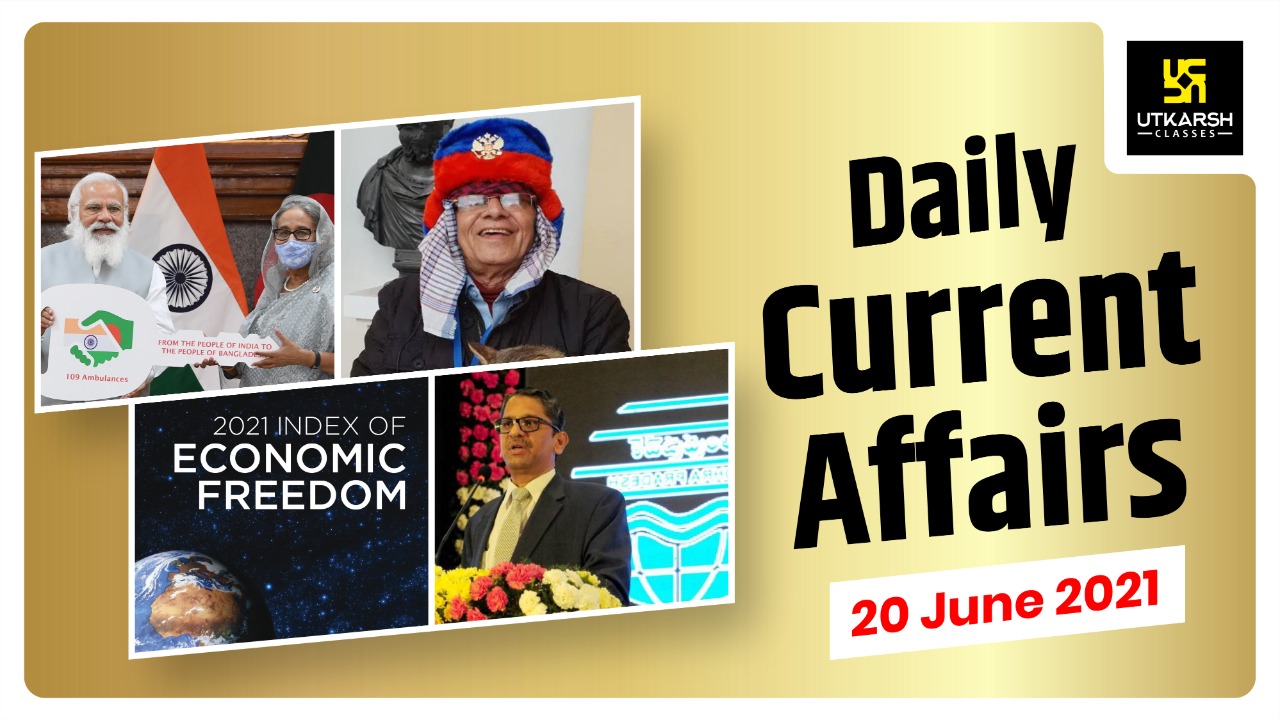 On June 18, 2021, an Ahmedabad-based pharmaceutical company, Zydus Cadila is expected to petition the Drug Controller General of India (DCGI) for emergency use authorization of their COVID-19 vaccine ZyCoV-D.

ZyCoV-D will be the world’s first DNA plasmid-based vaccine against COVID-19, if authorised and would become India’s fourth vaccine joining the COVAXIN, COVISHIELD, and SPUTNIK V vaccines now in use.

On June 18, 2021, India and Bhutan signed a Memorandum of Understanding (MoU) to expand environmental cooperation between the two countries.

Prakash Javadekar, Minister of Environment, Forests, and Climate Change signed the pact virtually on behalf of India, while Lyonpo Dr. Tandi Dorji, Chairperson of the National Environment Commission signed it on behalf of Bhutan.

The 15th edition of the Global Peace Index has been released that ranks 163 countries and includes about 99.7% of the world population. A total increase of 10% in civil unrest was observed with the major contributor being the COVID-19 pandemic.

The first 10 spots were almost unchanged from 2020, primarily dominated by the European countries except New Zealand and Canada while the last 10 spots were absolutely unchanged. A rise of 244% in global riots and general strikes was also observed between 2011 and 2019. Nearly 18% of the world population has experienced violence while about 75% feel that the world is becoming a safer place.

Global Peace Index (GPI) is a report that evaluates the index of the peacefulness of nations and regions. The report is prepared by the Institute of Economics and Peace. The GPI has shown an increase in violence in the past decade. There are 23 indicators (qualitative and quantitative) that help to assess the peacefulness of a country or region.

Father’s day is a day meant to honour fatherhood and their influence in the society. It is celebrated on the third Sunday in the month of June every year. This year, it is being celebrated on 20th June.

An international day to pay homage to the refugees around the world, that is designated by the United Nations. It is celebrated on 20th June every year in order to celebrate the courage and strength of the people who were pressured to leave their homeland and flee to avoid persecution or any kind of conflict.

A few features have been added to the existing features of the ICMED Scheme which was launched in 2016. The addition has been done by the Quality Council of India (QCI) and Association of Indian Manufacturers of Medical Devices (AiMeD).

The new ICMED 13485 Plus Scheme was launched digitally on 18th June, 2021. It was undertaken to attest to the quality and safety standards of medical devices.

About Quality Council of India (QCI)

The Quality Council of India (QCI) was originally set up as a public- private partnership where the NAB was just supported but not owned by the government. It was used as a third-party in order to improve the quality of the departments and the industry. It eventually came to be known as an independent autonomous body that worked to reassure the quality and standards of all social and economic activities.

The main association bodies are Associated Chambers of Commerce and Industry of India (ASSOCHAM), Confederation of Indian Industry(CII). The Federation of Indian Chambers of Commerce and Industry (FICCI) became the promoters of the organizers and QCI was established under the Societies Registration Act, 1997 to provide approval services in various sectors for product and services.

The  AYUSH Ministry announced that a special cancellation stamp would be issued by India Post in order to memorialise the International Yoga Day.

About Ministry of AYUSH

The Ministry of AYUSH ( Ayurveda, Yoga, Naturopathy, Unani, Siddha, Sowa-Rigpa and Homeopathy) is entrusted with developing education and research along with the propagation of indigenous alternative medicine systems in India. It is headed by a Minister of State ( Independent Charge) and is currently held by Shripad Yesso Naik

Nitin Gadkari, Minister for Road Transport & Highways, has stated that the Central Government has set a target to reduce the amount of road accidents by 50% by the year 2024.

The Ministry of Tourism has released three draft strategies which would boost the tourism sector that was affected due to the COVID-19 pandemic. The draft strategies were put forward with tactical roadmaps that would promote India as a medical and rural tourism destination.

About the Ministry of Tourism

The Ministry of Tourism is a branch of the Indian Government that is at the helm and the apex body that formulates and administers the laws, rules and regulations that pertain to the development and promotion of tourism in India.